Why create a national day to HIV testing?  Despite recent advances in prevention, testing, and treatment, HIV continues to be a significant public health issue in the United States.  HIV can affect anyone regardless of age, race/ethnicity, education, or geographic location.

According to the Centers for Disease Control and Prevention (CDC), approximately 50,000 people in the United States become infected with HIV every year.  However, the CDC estimates that one in seven people who have HIV do not know they are infected.

The CDC’s new “Start Talking. Stop HIV.” initiative seeks to reduce new HIV infections among men who have sex with men by encouraging open discussion about a range of HIV prevention strategies and related sexual health issues between sex partners. The CDC reminds us that effective and open partner communication about HIV helps to reduce HIV transmission.  Effective and open communication includes talking about HIV testing, HIV status disclosure, condom use, and treatment options to prevent and treat HIV.  However, disclosing one's serostatus creates considerable emotional strain for people living with HIV, regardless of gender and sexual orientation. 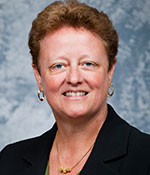 Dr. Julianne Serovich, Dean of the College of Behavioral and Community Sciences Serovich has studied HIV disclosure since 1997.  In previous studies, she found that HIV-positive men who disclose their condition are more likely to get necessary medical help, to find out about new clinical trials and therapies, are more likely to get social support, and have less regret about disclosing their serostatus.  “Disclosure may be difficult,” Dr. Serovich says, “but the long-term consequences appear to be positive.”

Understanding why people disclose is necessary to support HIV prevention efforts. Dr. Serovich is currently developing an intervention to assist HIV positive persons to disclose their serostatus to sexual partners, which she believes can play an important role in curbing rates of HIV transmission among men who have sex with men.

To find a free, fast, and confidential testing site locally, visit the Act Against AIDS webpage, or text your local ZIP code to KNOWIT to receive the location of a local testing site.

To learn more about Dr. Serovich’s work, read about her grants, her articles, or contact her at jserovich@usf.edu.

Serving nearly 48,000 students, the University of South Floridais one of the largest public universities in the nation, and among the top 50 universities, public or private, for federal research expenditures. The College of Behavioral & Community Sciencesserves more than 2,600 students with six undergraduate, nine masters, and five doctoral programs housed in six academic departments/schools.  CBCS received $27.4 million in total grants awards in FY14.