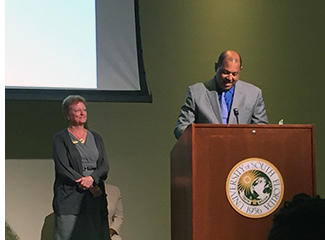 Dr. Wright first came to USF in 1985 as a faculty member in rehabilitation counseling.  Shortly thereafter, he was selected for the McKnight Minority Junior Faculty Development Fellowship.  It did not take long for the University to recognize Dr. Wright’s administrative talents.  Only six years after he came to the university, Tennyson was asked to work in the Provost’s Office first as Assistant Provost, then as Associate Provost, and then as Vice Provost. During the twelve years he spent in the Provost’s Office, he was responsible for overseeing faculty appointments, tenure, promotion, collective bargaining, faculty salary processes, and dispute resolution.  It is fair to say that most of the faculty who are at USF today were touched in one way or another by the service provided by Dr. Wright while he was Vice Provost.

Of all of the titles Dr. Wright held, the title he seemed to value the most was that of faculty member. When Tennyson returned to his department, he looked forward to having time to devote to students, write grant proposals, and publish his work.  He saw himself as returning to the good life of a faculty member.  However, it wasn’t long before the faculty in his own department asked him to provide service once again—this time as Chair of the Department of Rehabilitation and Mental Health Counseling.  Although he was somewhat reluctant about stepping back into an administrative role, he felt it was the best for his department and soon warmed to the assignment.  In fact, he continued in this role until the day he retired.

Throughout the time that Tennyson served in administrative positions, he never forgot the reason he entered academia.  He wanted to help people.  Specifically he wanted to help people with disabilities or other special needs gain access to education, job training, rehabilitation when needed, and employment.  During his career, he received over $14 million in grants and contracts to educational support for high school students from low-income families and first-generation-in-college students.  His grants also led to an increase in the number of qualified vocational rehabilitation counselors in the state who could provide high quality assessment and evaluation services for individuals needing job redesign and worksite modifications in order to be successful.  He was particularly interested in disparities that existed between African Americans and other populations regarding health, mental health, and disability.  Much of Dr. Wright’s work focused on ways to improve the effectiveness of services for African Americans with disabilities.

Tennyson also provided valuable service to his profession.  Between 1989 and 1991, he served as a member of the President’s Committee on Employment of People with Disabilities.  He chaired the program committee for the National Rehabilitation Association, co-chaired the annual training conference of the National Association of Multi-cultural Rehabilitation Concerns, and served as editor of the National Council on Rehabilitation Education Report.  These professional organizations also recognized Dr. Wright’s contributions by giving him the Sylvia Walker Multicultural Award as well as the Yvonne Johnson National Leadership Award.

Dr. Wright held leadership positions on 31 different university committees at the department, college, and university levels.  For example, he was involved with the EXCEL Leadership Program for Women and Minorities, The University Research Compliance Task Force, and the Faculty Committee on Admission of Student Athletes.  He was a mentor in the McNair Scholars Program and provided leadership for the Committee on Black Affairs, the Black Faculty and Staff Association, the Institute on Black Life, and The Black Graduate and Professional Student Association.

Dr. Wright received over 21 awards from these groups during his career.   However, the awards only tell us that his service was appreciated but they don’t tell us the reasons why.  I would like to talk about my own personal experience with Tennyson because I believe the characteristics I experienced were likely those that led to his successful contributions university wide.  In every interaction I had with Tennyson, I found him to be a good listener, a thoughtful responder, and a person willing to help no matter how difficult the task.  No matter what issue we discussed, he always provided calm, insightful, and deliberate responses.  I could count on him to be fair, objective, and reasonable even in the most difficult of situations.  I am convinced it is these attributes that have made Tennyson such a talented leader and a person who has made a great impact on our university.  His ongoing commitment to faculty, to students, to those who have disabilities or other special needs make him the outstanding person that he is.   It is with great pride that I am here today to participate in the celebration of Dr. Tennyson Wright’s outstanding service to USF.