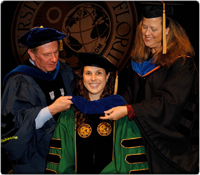 The first job out of college changed Tara Richards' plan to attend law school after majoring in political science. Working at a juvenile child support court in Tennessee, she saw multiple generations of women – typically single mothers – struggling to survive histories of abuse and violence and seeking assistance from a system that could offer little help.

"I was already interested in women's status in society generally, and I decided to pursue a degree that would allow me to work on broader policy issues," she said.

In addition to her academic achievement, Richards gives back to the community by serving as a mentor with Teens in Action, a 10-month youth development and civic engagement program. This year, youth were paired with the Spring of Tampa Bay and were instrumental in planning and hosting a community-wide event to raise awareness about teen dating violence. Richards explained the importance of educating youth about equality in relationships and how to communicate with their partners to prevent violence.

In the years that Richards has been studying domestic violence, she has seen improvements in media coverage. "The way journalists are portraying domestic violence victims has actually changed for the better," she said. "You now see less victim blaming, some inclusion of local resources for victims, and quotes from domestic violence experts [who] are better at explaining how domestic violence evolves and how it is ongoing in nature and part of greater social problems." She hopes this kind of coverage will "assist other victims to seek out help and realize they are not alone. It can also dispel myths about domestic violence to the general public."

Richards' accolades include receiving the Graduate Scholar Award by the American Society of Criminology's Division on Women and Crime, multiple journal article publications, book chapters, encyclopedia entries, research briefs, and over a dozen professional conference presentations. She is working with Dr. Holly Hills at the Louis de la Parte Florida Mental Health Institute and Dr. Wesley Jennings at the USF Criminology Department to focus on violence against women and girls and the intersection of gender, class and crime, and she is currently seeking an academic position that will allow her to continue teaching and conducting research.