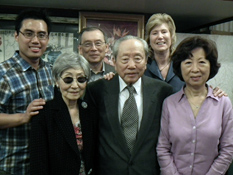 The 2012 recipient of the International Association of Asian Crime Investigators and Chinese-American Educational Foundation (IAACI-CAEF) Scholarship for Asian Students in Criminology was Mr. Heng Choon (Oliver) Chan. Having earned his PhD in Criminology from USF in May of 2012, Mr. Chan has been the recipient of this scholarship four times since 2007. Presently, he is a Criminology Researcher at the University of Hong Kong. Mr. Chan was honored to recently have met Mr. Henry Kwoh, one of the original donors of this endowed scholarship, so that he could express his gratitude for the impact the scholarship had on his academic career.

The evening before Mr. Chan was to receive his doctorate from USF during the Spring 2012 Commencement, Mr. Kwoh hosted a traditional 8 course Mandarin dinner in his honor. Attending the dinner, in addition to these two gentlemen who were meeting for the first time, was Dr. Kathleen Heide (USF Criminology Faculty), Dr. Karen Griffin (CBCS Director of Development) Dr. and Mrs. Robert Chang (former USF Faculty) and members of the Kwoh and Chan families.

The International Association of Asian Crime Investigators and Chinese-American Educational Foundation (IAACI-CAEF) Endowed Scholarship for Asian Students in Criminology was first established in 1998. Recipients of this scholarship must be full-time students (graduate students or undergraduate students entering their junior or senior year), pursuing a declared major in Criminology, and are attending the St. Petersburg or Tampa campus. Preference is given to a student who is a citizen of any Asian country or one who has an interest in the Asian community, and demonstrates leadership.