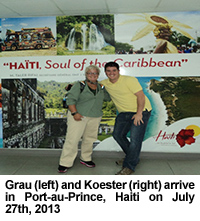 When Jennifer Grau and Christopher Koester decided that, with the help of the community, they would raise funds for a family in need in Haiti, they knew they would be changing someone's life forever. Little did they know it would change their lives forever, as well.

Drs. Guitele Rahill and Manisha Joshi were on a trip to Haiti in March 2013 collecting preliminary data for a grant that would help reduce HIV risk for female victims of sexual violence in the aftermath of the 2010 earthquake. In their travels, they came across a 15-year-old victim of sexual violence, assaulted while sleeping outside after the earthquake. Though she was unable to participate in the focus groups because of an age limit, they did not forget her.

"Sexual violence is an issue of global public health relevance. There was no mother involved; she died in the earthquake. The young lady was sleeping outside in the aftermath of it all and, at the time, she was not speaking. She was selectively mute," said Dr. Rahill.

As these faculty members conducted focus groups, the young victim's father waited to meet with them. He spoke of how he had been unable to afford to rebuild his home after it was destroyed in the earthquake and how his daughter still experienced medical problems related to the assault.

The cost of rebuilding his home and restoring relative safety to his daughter would cost U.S. $2,000 and with a daily income of U.S. $1, it seemed like an impossible task. Though they made no promises to the man, they felt compelled to share this story with anyone willing to listen.

Upon their return to the United States, Drs. Rahill and Joshi incorporated this research experience into their classrooms. Grau and Koester were among those in attendance and, for them, it was an easy decision. "Why can't we raise the $2,000?" asked Koester.

"As students, when we heard it, there was a lot of talk about how people wanted to help. But for me, and for Chris himself, we wanted to re-establish a safety for the young girl by rebuilding the house," said Grau. 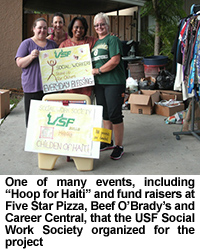 With the help of fellow classmates, Michelle Litts and Amanda Hankins, they were able to kick off the fundraising with a yard sale. Combined with the efforts of a Beef 'O' Brady's spirit night where 10% of proceeds were donated; a website-and-customer-based fundraiser through Koester's sister-in-law's restaurant, Five Star Pizza; a "Hoops for Haiti" 3-on-3 tournament put together with the support of the Social Work Society; and small donations from various community members, USF College of Behavioral and Community Sciences faculty members and staff, Grau and Koester were able to raise $1,850.

"Chris was the fundraising guru of it all. He was responsible for nearly half of the money that was raised," said Grau.

After investing nearly $2,000 each in personal funds, Grau, Koester and Dr. Rahill were able to personally deliver the funds and were also able to bring over 3 suitcases full of clothes, shoes, baby bottles, onesies and other household items. With the guidance of the community leaders in Haiti, these items were separated to help 5 women who have survived sexual violence in the aftermath of the 2010 Haiti earthquake.

"What they do is they sell these items so they have income. Those that couldn't help by donating money donated items to help these women," said Grau.

This was a unique and beneficial experience for all involved. It was a reminder for these faculty members and students that there are caring people in the world and, with the right amount of determination and support, anything can be accomplished.

"It's about strength in numbers – people coming together and collectively changing the world," said Dr. Joshi.

"This has been one of the greatest and most gratifying experiences of my life. This is definitely something I would like to be part of again," said Koester.

Community leaders in Haiti confirmed on Aug. 16 that construction on the home was underway. Once it is complete, Grau and Koester have a dinner invitation to come back and enjoy what their hard work has accomplished.