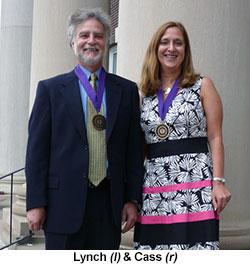 Dr. Lynch is widely recognized for his research related to radical/critical criminology, corporate crime, and green criminology.  He is regarded as “the father” of green criminology, which has now expanded into a global intellectual movement.  In 2011, he received a lifetime achievement award from the Division on Critical Criminology of the American Society of Criminology recognizing his scholarly contributions to radical/critical criminology.  Dr. Lynch recently published his 19th book. He is included in "2000 Outstanding Intellectuals of the 21st Century,"  by the International Biographical Center in Cambridge, England (2015), and Marquis’ "Who’s Who in the World”, the 2015 Edition. Dr. Lynch received his M.A. (1983) and Ph.D. (1988) from the State University of New York at Albany.

Before joining the USF department of criminology in 2012, Dr. Cass spent 18 years working as a researcher and consultant in juvenile justice, and was a part of the nationwide effort to bring evidence-based practices to the field of juvenile justice. She worked as a researcher for the Florida Department of Juvenile Justice and served as Director of Research and Evaluation for Eckerd Youth Alternatives and Vice-President of Research and Development at Assessments.Com. Her work focuses on all aspects of juvenile justice programming; from risk assessment and evidence-based treatment to process evaluation and impact assessment.  She has proudly worked with hundreds of juvenile justice workers to promote change both at the individual and organizational level. In 2012, Dr. Cass joined the Department of Criminology at the University of South Florida and currently teaches and serves as the Graduate Student Coordinator. Dr. Cass received her M.A. (1985) and Ph.D. (1991) from the State University of New York at Albany.

Drs. Lynch and Cass met while they were students at Albany in 1985 and will celebrate their 27th wedding anniversary this month. Their trip to Albany allowed them to visit their professors and the friends they met in graduate school who still live there. “I was also hooded at the ceremony by my major Professor and Dean of the School of Criminal Justice, Alan Lizotte.  I had been unable to attend my graduation ceremony in 1992 because I had recently given birth to my son.  Being hooded at the award ceremony made it extra special,” said Cass.